This morning, my 5 year old son was upset that my 8 year old daughter was not playing by the right rules in a game (did you know that there are right rules and wrong rules?) so he called her names. He called her fat.

We typically don't use that word in our house. My daughter is very small for her age, and she already spends a lot of time looking at herself in the mirror (usually dancing, sometimes in her underwear, trying to copy the moves that she thinks female rock stars are supposed to do- I am not sure if her babysitter is amused or disturbed by this). She occasionally talks about her fear of gaining weight, which I try to address mostly in two ways; first, by talking about health, and not body size, as the standard that is best to be internalized, and second, by talking to her about the objectification of women's bodies and unrealistic standards of beauty that she sees in the media (in a way that I believe is age appropriate).

Anyway, the point is that a 5 year old child, who still hasn't figured out that Santa doesn't exist and has trouble differentiating between cartoons and real life, has somehow figured out that the worst thing you can call a female is fat.
Posted by Ms.Marx at 8:32 AM 1 comments

This is an infographic on the evolution of airport security... I've only been on a plane once in the last decade, but I was scared that I would end up having to face some kind of security. I would rather take a bus than go through a scanner or face "pat down." I spent a few hours researching all of the rules about what I can carry on the plane and what I could not, and even printed and packed a list so I wouldn't get in trouble coming back... and all of this was for a 1 hour flight in which I never left Ontario.

But, my concern with this was made clear to me while I was listening to the radio in the car last week. There was a local radio show that was talking about the "pat downs" and their call-in question was with regards to which celebrity the callers would like to give an airport security pat down to. As much as airport security officials claim that it is not sexual to touch people's bodies in the name of safety, it is certainly invasive and the experiences of women who have been through it suggest that many of them felt violated.

Another advice from a Disney Princess video

I will probably be called out for being overly picky here, but I am somewhat annoyed that the characters that I would gender as typically masculine on this lego box (which my daughter got for her birthday) are busy doing things... there is a business man, a delivery man, and a policeman, whereas the one I would gender as a woman is just sitting on a bench with no apparent job or title. 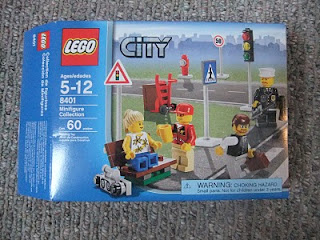 This side of the box shows the same thing... the men are busy doing things... walking to work, delivering heavy packages, protecting road signs while holding various fancy noise making devices (?), and the woman sits down on the bench and listens to music. 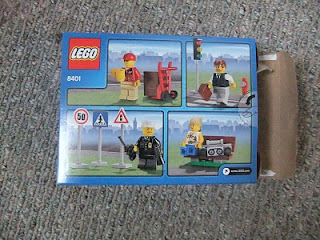 Because men do things while women just are. Maybe it just gets to me right now because the last couple months of thesis work has centered largely around the invisibility of unpaid domestic labour.

I'm going to go switch the people's stuff around right now and destroy the box... the woman is about to get the briefcase and I will make a tiny vacuum or something for the now business-less guy.

Edited to add: I also just noticed that the woman is the only one smiling... not sure if it is because she's not busy doing stuff like the men so she is allowed to enjoy her free time, or because, as a woman, she is supposed to be pleasant. Either way, delivery people enjoying their coffee don't need to scowl.
Posted by Ms.Marx at 8:10 AM 4 comments

SPARKsummit video on the sexualization of girls in the media

This video, on the sexualization of girls and women in the media, is from the SPARK summit, SPARK stands for Sexualization Protest: Action, Resist, Knowledge.

That being said, I do like the message that they are trying to get across, and I agree that it is important get young girls to actively decide to watch on TV, but I just think this particular video is somewhat blurred with anti-sex messages.
Posted by Ms.Marx at 7:23 AM 1 comments

Private Practice: an example of how sexual assault is depicted on television

Last night on Private Practice, one of the main characters, a doctor named Charlotte, was sexually assaulted at work. People making the show were in close contact with rape victims and an anti-sexual assault organization. Still, I had a few problems with this episode. I am not going to embed a video of sexual assault on my blog (for reasons that will be discussed further in this post), but if you feel the need to see what I am referring to, there is a video here.

The biggest problem is the "type" of rape that was shown. The perpetrator was a patient at the hospital who appeared to have a mental illness of some sort (people with mental health problems are more likely to be the victim than the rapist). It was an extremely violent case of stranger rape. The woman involved had no prior relationship with her rapist, she was not drinking, not walking alone outside at night, nor was she dressed provocatively or doing anything else that a "good" rape victim doesn't do. So, this episode really didn't push any boundaries to help people conceive of rape differently. I thought it could have been much more useful to depict a type of rape that isn't often seen as such, rather than playing into stereotypes of what constitutes "real" rape.

So many shows on primetime tv (think CSI and Law & Order), can show various forms of sexual assault in ways that can help people become more aware of sexual assault, but they generally depict scenes in a way that make rape look a lot like sex. The act of rape is typically more about power than sex, but that can be difficult to depict on television. Private Practice did show parts of the rape, which sexualizes it to a degree. I prefer when the scenes show enough to imply what is happening, without graphic images when "No matter how well-motivated, a rape scene is a sex scene, and TV shows are fantasies."

The part that bothered me most was her hiding the rape. At every commercial break, I expressed my frustration with her silence to the person I was watching the show with. She told people she was mugged, only told one person what actually happened, and refused a rape kit. I understand how horrible the criminal justice system can be, but it is not a he-said-she-said trial, so I personally cannot understand why she wouldn't report it other than a fear that other people will look at her differently. And this is an area that I hope they focus on differently in upcoming episodes.

Charlotte said "he took my wallet. He didn't take anything else" to the one person she told about the rape. I personally tend to agree with this statement... but not in the way that she meant it. He didn't take anything, he raped her. I don't like thinking about rape as taking something from someone. My opinion is that conceiving of it as something being taken from you is linked to patriarchal notions of purity and innocence and considers rape victims damaged in some way, which I completely do not agree with. I don't mean to erase some people's experiences with this last paragraph, as some people do experience it as something having been taken from them... this just doesn't make sense to me, personally.

In what was clearly Rhimes’s mission statement, Charlotte contrasted her rape with rapes in "made-for-TV movies." In these gauzy victim narratives, she says mockingly, the woman rocks in the shower crying, and when the rape happens, her eyes go blank so she can go somewhere else. “It’s nothing like that,” she says bitterly. “It's dirty and sweaty and he licks your face and he wipes himself off in your hair and when you try to scream he punches you so hard you see God.”

I'm not sure that narrative is any more true for all victims than the made-for-TV movie shower crying scene, but it is good to see this depicted in a different way.
Posted by Ms.Marx at 6:57 PM 0 comments

I don't even know where to begin...

I just don't know what to say about this... do we really think that we are so far past racism that this is appropriate on any level?

The most horrifying part is that these two men won the costume contest at the Royal Canadian Legion in Cambellford, Ontario, a small predominantly white town not far from Toronto.

They meant it as a joke... they found it funny. I don't think that we can (or should) get to a point where murder, slavery, and racism are funny.
On CTV News tonight, the son of one of these men said "no, he's not racist or anything. Obviously not" and then said something about how it is ok because people dress like serial killers every day. How can I argue with that logic?
Last year, when a group of white students dressed as the cast of Cool Runnings at the University of Toronto, there was a forum where students and faculty were invited to discuss the issue of blackface and whether it is appropriate... keep in mind that these students were trying to portray people that they admired in a movie they enjoyed, not showing a violent scene as a joke. One thing that came out of this forum was an article that presented various sides to the issue, and stated that

I tend to agree with this statement. Blackface is never ok. And blackface that depicts this level of hatred can never be funny. At very least, it appears as though there will be a thorough investigation.
Posted by Ms.Marx at 11:20 PM 2 comments