I just thought this was a beautiful video, and very different from what we would see on North American talent contests.

Here are a few differences that I noted. First, this performance is more than eight minutes long. Most talent shows that air in North America only give each performer about two minutes. I have heard this referred to as the Sesame Street generation, where all of our programs need to move on to new scenes in 3 minutes or less in order to keep us from getting bored. I don't know about other viewers, but I was far from being bored even at minute 8.

Also, there was nothing really pop-like about it. It contained raw emotion that made many people in the audience cry. I'm not sure if Adam Lambert or Terry Fator have that impact on people, not to say that they aren't talented. They are both extremely talented, but I am not sure that this sand animation would have made it to the finale of America's Got Talent, and I don't mean because America necessarily has better acts.

So much of western pop culture is ahistorical, I found it very refreshing to see how a pop culture television program can incorporate history with entertainment.
Posted by Ms.Marx at 8:40 AM 1 comments

I was watching the local news, and the teaser before the commercial said that there was a problem with consent forms for the H1N1 vaccine at schools in Sault Ste. Marie, Ontario. Because I have been following H1N1 news stories (with much annoyance), I decided to wait and see what this big problem was all about.

As it turns out, the big contraversy was that consent form asked for students' gender, but gave 5 options instead of 2 (male, female, other, unknown, and transgender). The horror! Isn't it outrageous of them to try and be so inclusive and disregard the binary that so many people have worked so hard to create and uphold? (I really wish sarcasm worked better online).

The Sault Star reports that local Catholic trustee Kathleen Rosilius was "astonished" at the "agenda-driven, social-engineering" language of the form. Because asking people their gender is agenda-driven. I'm sure the writers of the survey intended to convert as many people as possible to... to what, exactly? Ambiguity? The only agenda that they may have been pushing was tolerance.

I really cannot understand why people are offended with this consent form. All it does is acknowledge that there may be more gender options than most other forms that I've filled out recently (including EVERY scholarship and bursary application that I have filled out this year). How does including a few extra categories hurt anyone? How do reading these words have any kind of negative impact on anybody's lives? But omitting them does have consequences as it denies that this very omission is part of a specific agenda.

I can't help but think that if seeing words like 'transgender' and 'unknown' on most, if not every, form that requires gender information became the norm, then people who live outside of the gender binary would be much more readily accepted than they are right now.
Posted by Ms.Marx at 6:51 PM 4 comments 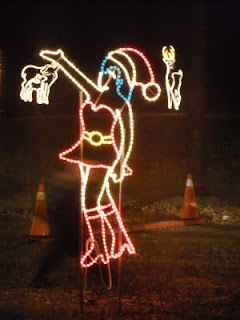 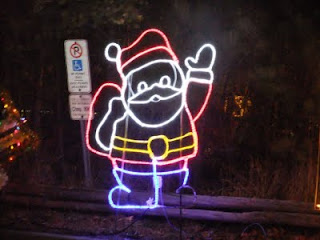 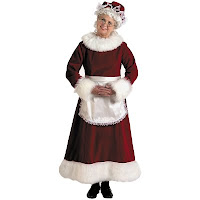 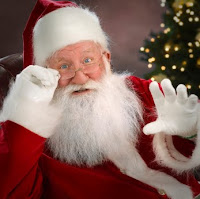 They do live in the North Pole, do they not? Is Mrs. Claus not allowed to wear warm clothing in that kind of environment, or is it so essential that women keep their bodies on display all the time that we ignore that part of this story. And stiletto heels are great for walking on ice and through deep snow. Very practical.
Posted by Ms.Marx at 7:57 PM 2 comments

This says it all

Sexualized ads and the poor as immoral 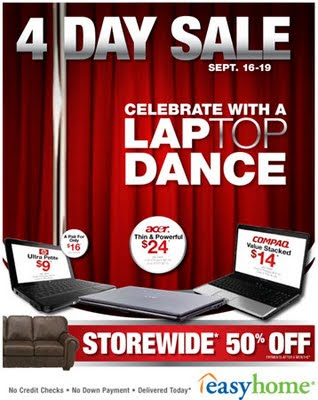 This is a flyer for a company that sells rent-to-own household items at outrageously high prices that is trying to sell laptops. It was posted on the window of one of their retail outlets, clearly visible from the road. It seems like a rather common attempt to get people's attention as they drive by the store and see a pole in the window.

Nevermind the ethical issues that come with paying $9 per week for more than 150 weeks, adding up to $1400 for a mini-notebook (which you can get at any electronics or department store for under $500).

In Excerpt- Notes of 1844 Karl Marx writes that "a man without credit is poor, a judgement that he is untrustworthy and unworthy of recognition, a social pariah and a bad man." This belief, that the poor are somehow not only less deserving, but morally inferior to people in middle and upper class, is the only reason that these stores are allowed to exist. People who cannot get credit or do not have the resources to save enough for large purchases must pay more than 3 times the cost of an item.

The combination of "sex sells" or the concept of women as sexual objects available to the male gaze, along with the way these stores are taking advantage of the poor, who already have to pay more for so many things (ie. laundry at the laundromat, higher banking fees by not qualifying for low fee accounts, and not having the ability to drive to the cheapest grocery store if you don't have a car), makes this an important issue.
Posted by Ms.Marx at 7:05 PM 0 comments

Anything to avoid those "embarassing" panty lines

Because underwear didn't come small enough, now they have created the C-String.

So, who are these things for? Apparently, not too many people. The sizing chart says size small fits women 95-115lbs. Size medium for 115-140lbs. There is no size large.

One woman's testimonial says that they are comfortable enough to wear to college lectures. She must not go to my university... most girls there wear PJ pants, I can't imagine why someone would have to wear one of these for a lecture. I also can't figure out what kind of material this is made out of, but I am hard pressed to think of any way that it could stay in place and be comfortable at the same time.

From the website pictures, it is clear that women must be relatively clean shaven in order to wear this product. Normal body hair on women is a big No-No. It gives us yet another way to purchase yet another product in order to subject women's bodies even further to the male gaze.

Really, is there anything wrong with normal underwear? 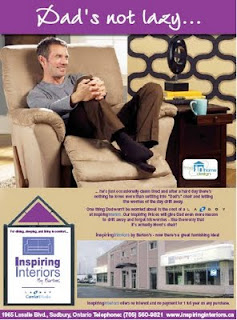 "Dad's not lazy... he's just occasionally damn tired and after a hard day there's nothing he loves more than settling into "Dad's" chair and letting the worries of the day drift away.
One thing Dad won't be worried about is the cost of a (chair) at (store). Our Inspiring Prices will give Dad even more reason to drift away and forget his worries - like the worry that it's actually Mom's chair!"

Apparently, mom doesn't get tired after a hard day of working the double day, or maybe she just doesn't have time to be damn tired, at least until after the kids have gone to bed.

And only dads are worried about money. I'm not entirely sure what they mean by the worry that it is actually mom's chair... is mom going to take over the chair if she ever gets a few minutes to sit down, or does mom only let dad think it's his chair? I don't get it.

What I do get from this ad, is the representations of "dads" role in the paid workforce. He is employed at a job important enough to cause him to worry about it after work, and works hard enough to come home tired after a long day. I'm not sure women's work is being represented as entirely invisible, because she doesn't have time to sit down and be mistaken for lazy. However, it is justified that "dad" gets to sit down because he has been working so hard whereas "Moms" aren't afforded that luxury. "Dad" also requires a comfortable chair to lounge in after that hard day's work.