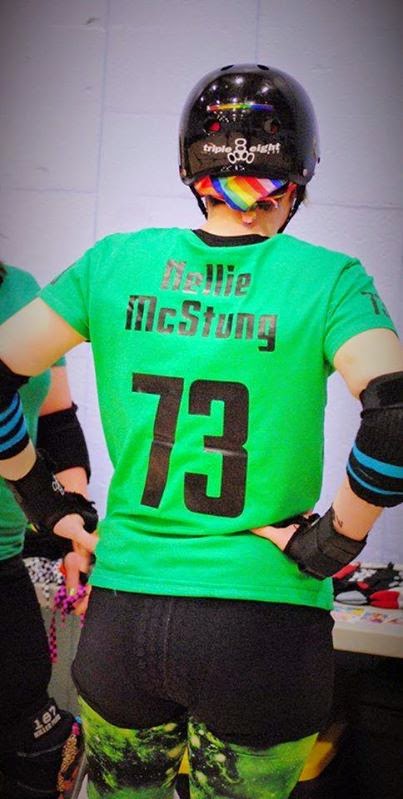 I have been playing roller derby for 2 years now.  Before joining, I had a lot of concerns about feminism within the sport that I talked about here.  Roller derby presents itself as a feminist and queer-friendly sport.  At the same time, comparisons have been made to women's WWE wrestling regarding women playing a contact sport in revealing clothing while men watch and cheer them on.  So, when I think about whether roller derby is queer and feminist, my answer is it depends, and I'm going to explain why.


By Women, For Women

My favorite thing about roller derby is that it is organized by women for women.  Men participate, they can play (Merby - men's roller derby - has become a thing), but the people who make the decisions about how the sport is played, where it is played, when it is played and by whom are almost all women.  Leagues are started and run by women.  Sometimes they are coached by men, but more often than not, the teams I have played for and against were coached by women.  The refs are typically men and take a supportive role within the leagues.  I think the most important piece to this is that there are no men making money off of women's physicality within roller derby - ok, teams may pay rent to landlords, so there is monetary exchanges happening, but men do not own teams and profit off of the work that women are doing (unlike roller derby in the 70s).

If you see only a few pictures of the sport, you might think that roller derby involves putting on fishnet tights, wearing weird makeup, picking out a cheeky name, and then hitting each other while wearing roller skates.  All of that can be true, but sometimes it is not.  Skater's can typically wear whatever they want while skating - some wear basketball shorts, some wear padded shorts, some wear underwear and fishnets.  I think I wear more padding than anyone else on the track!

For me, feminism does not involve fishnet tights, but it also does not involve policing the clothing of others - take any argument made by a feminist regarding the slutwalk and place it here! I also think the fact that women are wearing protective equipment including helmets and mouthguards and are playing a sport that is aggressive (and derby stance is not particularly sexy in the conventional, playboy-posing sense of the word) also creates space to argue that fishnets can be feminist.  Feminism is all about contradictions, and there are plenty of those within the sport of roller derby.

Most of the roller derby players that I have met have been white, able-bodied women aged 20-40 who can afford monthly dues and the cost of skates and equipment.  While I have played with and against Indigenous women and racialized women, and I know there are women on my team who struggle to come up with the funds to continue to play, I can't talk about roller derby without mentioning who is included and who is not.  I won't pretend to entirely understand the reasons for this, but I am sure they are complex (lower income for certain groups makes it harder to afford a several hundred dollar start up costs, not seeing people who look like you playing the sport makes it seem less desirable for you, cultural implications of dressing in specific ways and engaging in behaviors that are sometimes labelled "violent", etc etc).  There have also been a few recent criticisms of team logos for having racist symbols or culturally appropriation, which will definitely have an impact on who wants to play the sport.  These are issues that still need to be acknowledged and unpacked.

Gender policies vary by league and are quite complex.  I have met more trans and genderqueer folks through roller derby than through LGBTQ activist work unrelated to derby, so there is definitely something important going on here.  Many leagues have pride-themed bouts (that is the roller derby word for a game), and skaters often join pride parades and events.

Still, there is a policy upheld by WFTDA (Women's Flat Track Derby Association) requiring trans women to be on hormones, which can exclude those who do not have access to hormones.  A team can challenge the gender of a player, and that player will have to bring evidence of their gender to their team captain, which is invasive and problematic.  Several leagues have implemented policies where any female-identified player may join the women's teams, which I thought was a great policy until being part of a discussion about the role of a young trans boy in roller derby and now I am rethinking how gender is taken up in the sport.  I am by no means the expert here, but my opinion at the moment is that roller derby is among the most queer and trans-friendly sports that I have ever heard of, but that we still have work to do in order to make sure everyone is included in ways that they are comfortable with.

The part of roller derby that I have experienced as most feminist is the concept of sisterhood and empowerment.  Roller derby teams seem to operate more like a family than other sports teams I have participated in.  There is so much support from other skaters through local and international roller derby networks - it can be amazing to see the ways that the community pulls together.  For instance, last year one of my teammates was killed - there are still no answers about what happened or who killed her.  When this happened, the team really pulled together to help each other and other teams offered support in many different ways.

As for empowerment, there are several organizations set up helping victims of sexual assault or domestic violence get equipment and join a roller derby team.  Anecdotally, I have skated with women who have talked about how transformational roller derby has been to how they see themselves, their feelings of self-worth and leaving abusive partners. I was worried that playing a contact sport would trigger me at times with regards to violent situations and partners that I have had in the past, but I think it has largely done the opposite.  It has made me feel stronger and less anxious and afraid.  It has pushed me mentally, physically, and socially, and given me a support network to help get through it.  We also skate together at the local Take Back the Night.  Other teams take an active role in local sexual assault and harassment awareness and prevention in their communities.

I would be lying if I said that it was always positive and empowering - there were times when interpersonal conflict made it tough to continue - I have seen people leave the sport for this reason. I have heard people refer back to the commonsense assumption that if you get 30 women together, of course there will be conflict.  But I have also seen many women move past this and support each other in really fantastic ways that must be part of what feminists were talking about when they bring up the notion of sisterhood.

Roller derby is also one of the most body-positive sports that I have ever been part of.  In my experience with the game, I have never seen anyone be put down because of their weight.  I will admit that at first I had ideas about what fat bodies were capable of when it came to athletics, but my experience playing the game has completely changed the way that I look at bodies - my own and others.  In roller derby, there seems to be a role for all body types, and it isn't as simple as smaller bodies are good at jamming and larger bodies are good at blocking.  I now realize that size is not necessarily indicative of health, stamina, strength or ability to play the game.  It has also made me much more concerned about what my body can do instead of what my body looks like.  Since joining roller derby, the numbers on the scale and my pant size have both increased and I don't care - I don't care because the distance I can run and the number of squats and push ups I can do and weight I can lift has also increased.  I feel stronger.  And even though I know that strong bodies can also be objectified, I feel like this shift from caring about my weight (but trying not to) is a very feminist thing.  I also need to point out that I am very lucky to be able-bodied in this respect - I don't think there is a version of roller derby yet for people who cannot skate.

One issue that I am having trouble getting past is with respect to language.  Roller derby players are often referred to as "girls" in team names and in conversation.  We are derby girls - not derby players or women.  New skaters are referred to as Fresh Meat. I believe this refers more to some kind of tenderizing process than anything else, but it is hard for me to use the word "meat" for women and not think of blatant objectification.  Many derby names are also blatantly sexual - sometimes team names, sometimes player names.  This part can be more difficult for me to try and move past in my own head, and can be easier to accept a team name that is at least actively sexual (get'n lucky charms) than passive or naming body parts or names that sound violent or use words that I find offensive.  I totally get that it is meant to be tongue and cheek and even empowering in many cases, but I am not able to entirely see it that way.  Sometimes the names are feminist and inspiring, and it really helps me to focus on these parts of the sport.  Again, feminism is full of contradictions, and I think that roller derby has a lot of those, with moments of clear feminism, moments that are almost impossible to frame as feminist, and moments where it is both and neither at the same time.

Roller derby is made up of a variety of women, and is only as queer or feminist as the people who are playing the sport.  Some teams have amazing social justice committees and engage the community and each other in amazing ways.  Other teams play into the sexuality of their players, sometimes in cheeky ways, sometimes in overtly objectifying ways.  So, my answer is that there is nothing inherently feminist or queer about the sport itself, but that being organized by women for women and outside of the focus on profit that is seen in so many other sports, it opens a space where feminism and queerness can fit quite nicely.  Thus, the sport has more potential to be feminist and queer than so many others, and that is often how it is taken up by teams and skaters.

Also, it is incredibly fun to play, and I highly recommend seeing if your local league (if you are lucky enough to have one) will let you borrow some gear so you can come see what it is all about - you may find yourself coming back every week for more!